“The next day I went to photograph the poster in the light of day. While I was photographing the poster, a man came out of the building and rushed up to me. I’m paraphrasing but the conversation went like this:

Guy (agitated): “Did you put this up?”
Me: “Nope.” (lie)
Guy: “But you know who did.”
Me: “Nope. I’m just a guy who likes photographing street art.”
Guy: “Huh, street art… No such thing. This is all just vandalism. I’d know, I have an Arts degree” (he actually said that).
Me: “I don’t know. Some of it looks really good. Surely this poster is better than the tag it went over?”
Guy: “I guess it’s a little better than tagging. But it’s still just vandalism. It’s not art. These people are just junkies high on petrol fumes and…”

I kind of laughed at that point. But it was one of those laughs that you try to hold in, so it comes out more like a snort. That made him a lot more angry. I guess he figured that I was either the artist, or I knew the artist because he then made a point of trying to tear down the poster in front of me. However I have just started coating posters in polyurethane to make them waterproof. What he (and I) didn’t know is that this apparently also makes the posters near impossible to tear off by hand. So instead of tearing it, he could only chip at the edges. He caught his finger nail under it, hurt himself and really cracked the angries. Then he pulled out his keys and kind of scratched at it for a while, but didn’t make much progress.

Me: “Do you mind if I photograph you tearing the poster down?”
Guy: “No. You should photograph it and put it on one of those little websites, to let all these other vandals know what happens when they put up this crap.”
Me: “Ok, I’ll do that.”
Camera: Click, click.

I took the photo of him tearing down the poster. I then turned that photo into a poster and put it right next to the last one.” 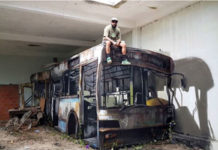 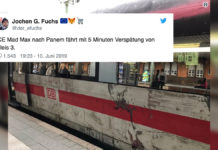 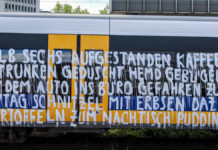 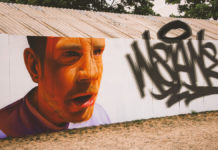 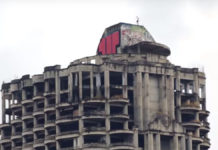